We are now a month into Flyod v. City of New York, the federal class action law suit filed against the NYPD that claims they engaged in racial profiling and uncalled for stop and frisks on law-abiding New Yorkers – and the impact that stop and frisk practices have on African-American and Latino communities is more prevalent than ever. Mott Haven’s 40th precinct has one of the highest rates of stop and frisk in the city.

This evening, Melissa will be at a Town Hall meeting in the Bronx that she is co-sponsoring, demanding there be an end to discriminatory NYPD practices and calling for a more effective approach to community safety and the passage of the Community Safety Act. It’s time that the NYPD takes accountability for their actions. The Bronx Defenders and the Vacamas Programs for Youth will be hosting tonight’s meeting. 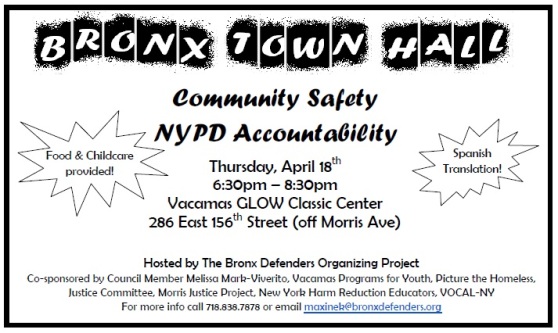 Please join us tonight, Tuesday, February 5th from 6:30 to 8:30 PM for a Know Your Rights! training that will be hosted by Picture the Homeless. Here, you will learn your rights with the NYPD and how to exercise those rights as safely as possible. We will also be holding a Cop Watch! training next Tuesday, February 12th from 6:30 to 8:30 PM, hosted by the Justice Committee. At this training, we will learn how to observe and document police activity in your neighborhood. The ultimate goal of these trainings are to help end discriminatory policing – we believe in standing up and being a part of the solution.

WHO: Council Member Melissa Mark-Viverito, Picture the Homeless, The Bronx Defenders, Justice Committee, and Communities United for Police Reform
WHAT & WHEN: East Harlem Stand Up! Trainings

Last Thursday, Melissa addressed over 200 East Harlem and South Bronx residents at Taino Tower’s Crystal Room at the East Harlem Stand Up event co-sponsored by Melissa, Justice Committee, Picture the Homeless, and the Bronx Defenders. The town hall forum was meant to address discriminatory policing in our community.

The event included speeches by Comptroller John Liu, as well as organizers who educated participants on their constitutional rights, and what to do and say if you are stopped or harassed by the NYPD. Residents were also given the opportunity to speak out about their experiences with stop and frisk.

Melissa called for the East Harlem community to unite and fight this unconstitutional practice:

“East Harlem has had over 17,000 stops in our 23rd Precinct alone, the highest number in Manhattan.  This policy is criminalizing an entire generation of young people in our community!

This is why I introduced a resolution in support of a change in state law that would end the NYPD’s enforcement of small-time marijuana possession during stop-and-frisks, where police would routinely ask individuals to empty their pockets, and upon finding marijuana would arrest them.

This practice was leading to the arrest of more than 50,000 New Yorkers each year, costing over $75 million, money which should instead be invested in youth programs.

This administration has been closing our schools, cutting our after-school programs, and then cracking down on our kids when they’re on the street. This is racial discrimination at its finest!

If the city wants to combat violence in our communities than we have to look at the Root Causes: poverty, unemployment, lack of decent affordable housing or health care or education or recreational programs for our youth.  ” 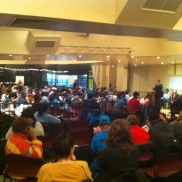 On Thursday, January 17th, Melissa will be co-sponsoring a town hall event about discriminatory policing with the Justice Committee. At “East Harlem Stand Up!”, community members will be encouraged to speak out against the NYPD’s Stop & Frisk policy, and the program will also include Know Your Rights training and a discussion of the Community Safety Act which Melissa is co-sponsoring. East Harlem is disproportionately impacted by this policy, with the highest number of stops in Manhattan.

WHO: Council Member Melissa Mark-Viverito, The Bronx Defenders, Picture the Homeless, and the Justice Committee
WHAT: Town Hall on Discriminatory Policing
WHEN: Thursday, January 17th, 6:30 – 8:30 PM
WHERE: Taino Towers in the Crystal Room – 240 East 123rd Street
* For more information, call 347-676-1878 or email yul-san@justicecommittee.org
* Spanish translation, childcare and free food will be provided!