“Today’s ruling is a validation for all of us – elected officials, advocates and New Yorkers across our city – who have seen stop and frisk for what it is: an unconstitutional police practice. I applaud Judge Scheindlin for calling for a federal monitor of the Police Department, who will surely institute a series of much-needed reforms over a policy that has relentlessly targeted low-income communities of color under the Bloomberg administration’s watch. Coupled with the pending veto override of the Community Safety Act, this is a truly historic time that will shape the future of police-community relations in our city for years to come. Safety only comes with a true community partnership along with police practices that respect the civil rights of all members of our community and are not based on the suspension of rights of one large segment of our population. This ruling validates that position.”

We’ve all heard about the student debt crisis in our country. The New York City Council passed two resolutions on Monday related to our ballooning student debt. Melissa sponsored one of the two resolutions, in support of the Bank on Students Loan Fairness Act introduced by Senator Elizabeth Warren, which would reduce the interest rate of federal subsidized Stafford student loans for one year from the current 3.4% to 0.75%.

Want to show your support for reducing student debt? Click here to sign a petition by Senator Elizabeth Warren, in support of her bill, which would allow students to pay the same rate that banks pay to borrow money from the government for one year.

If Congress does not act before this coming Monday, the interest rates of all federal student loans will double from 3.4% to 6.8%, a move that would have devastating impacts across the country. The federal legislation supported by these Council esolutions can allow students to refinance their student loans as well as lower interest rates to those offered to U.S. banks by the Department of the Treasury.

Currently, over 38 million people have student loan debt obligations, amounting to close to $1 trillion. Over the last 10 years, student loan debt has quadrupled from $240 billion in 2003. With the planned increase in federal Stafford loans, more defaults are expected as currently, students are not able to refinance their loans.

“Our two resolutions send a clear message from New York City that we demand action in Congress on measures that will lower student loan debt. We must continue to invest in our young people without asking them to assume such a high level of debt in return, especially in today’s economy. The planned doubling of interest rates will only discourage prospective college students from seeking to better themselves through higher education. That is why I am supporting Senator Warren’s proposal to lower interest rates to the same level that banks pay for at least one year, as well as Senator Gillibrand’s legislation for a long-term fix. We cannot continue to be held hostage by forces in our country that want to do nothing else but impede our President’s agenda while turning a blind eye to our most vulnerable. Senators Gillibrand and Warren are both showing incredible leadership on this issue and I thank them as well as Higher Education Chair Rodriguez for ushering these resolutions to passage in the City Council.” 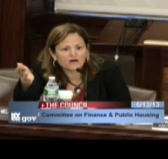 NYCHA’s Section 8 housing subsidies have been drastically cut by $205 million because of  the federal sequester, which will lead in 500 lay-offs, a hiring freeze, community center closures, and program cuts.  This travesty is just part of the bigger picture, which Melissa talked about earlier in the Chambers of City Hall during the Committee on Finance & Public Housing hearing that took place this morning. The Republican party is holding our nation hostage because of politics and preventing our President from moving his agenda forward. We need to come together as a city and tell Congress that we will not allow our community to suffer.